To all who have read these recent posts I will remind that the documentation of quotes has been lost.  Therefore, many of the quotes are not properly attributed to those who made them.

I recently began a series of articles dealing with the sufficiency of Scripture.  I began by giving a definition and description of sufficiency.  By way of introduction and reminder, the following is our definition: Sufficiency means that something is enough to meet the needs of a situation or a proposed end.  It refers to something being what is necessary or desirable for a specified need.  Simply put, if something is sufficient it is just what the doctor ordered.

In the last post we examined the move toward a proper hermeneutic that was directly attributable to the great Reformers including Luther and Calvin.  We also briefly discussed the fact that even they did not consistently utilize the proper procedures in their interpretation and exegesis.

As a result of the Renaissance and the Reformation, both Churchmen and philosophers discovered a renewed interest in the world around them and how to interpret man’s existence in light of their surroundings.  That is not to say that such things were not being pondered before these two events, but in the wake of them their was a noticeable expansion of such explorations.  The consequences were not always positive.

From Revelation to Reason –

Although not the first to push the idea of rationalism, Rene’ Descartes (1596-1650) is seen by some to have begun the era of rationalism and many see him as the father of modern philosophy. In his system of philosophy, “human wisdom replaced divine revelation in trying to understand God…his philosophic thinking impressed many others to do the same.” 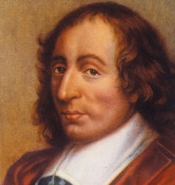 Following Descartes was Blaise Pascal (1623-1662) respected French scientist, and Christian apologist. Despite his belief in fulfilled prophecy, miracles, the witness of Christianity throughout history, and Scripture’s testimony concerning itself, “he opened the door to move away from the Bible by his belief that the evidence in the heart is the strongest proof about God.” Once again, Scripture is place in a subservient position to the interpreter instead of Scripture being in authority over the interpreter. The interpreter’s reason is sufficient to guide him, not Scripture.

From Rationalism to Idealism –

As influential as these two men were Francis Schaeffer believed that there were four other men who were more crucial in directing the mindset of philosophical thinking, which in turn filtered over into the overall view of the sufficiency of Scripture. They were Jean-Jaques Rousseau, Immanuel Kant, George Wilhelm Hegel, and SÆ ren Kierkegaard. For the purpose of this study the focus will be upon Kant, Hegel and Kierkegaard, with the edition of Friedrich Schleiermacher, the father of liberalism.

Immanuel Kant (1724-1804). By the time Kant came on the seen in the 18th century the train of philosophical thought was undergoing a shift in attitude. As Schaeffer explains:

“the older philosophic views were optimistic, for they assumed that people would be able through reason alone to establish a unified and true knowledge of what reality is and that when this happened they would have satisfying explanations for everything encountered in the universe and for all that people are and think.”

The shift that was taking place that Kant helped to perpetuate was a move from that former optimistic view to a pessimistic view of life. In their minds, and in truth, the humanistic ideal had failed. Philosophers gave up hope of a unifying answer to all of life’s questions. Therefore life itself was divided into two “stories”. The upper story, which was above and beyond mere human reason, and the lower story, the realm of human thought, understanding, and the physical world. As others before him, Kant could not find the key to unifying these two stories – In truth, a feat only possible in the pages of Scripture for only it is sufficient to answer life’s question and provide that unifying principle – and the philosophers were coming to the horrifying truth; “There was no way beginning from man alone to bring the (two stories) together.”

Yet Kant refused to return to the Christian view of reality. He reacted against both “mystical and pietistic Christianity, thinking it was too superstitious and spiritual…(and) the scholasticism that dominated Lutheranism…(arguing that) such rational proofs of God violated the limits of reason and had little to do with faith.”

Kant’s conclusions served to move the Christian Church farther from the sufficiency of Scripture and towards mysticism and liberalism.

George Wilhelm Friedrich Hegel (1770-1831). Hegel was one of Kant’s followers and went a step further in chipping away at the sufficiency of Scripture. In Hegel is found the foundation for all relativistic thought and the perfect example of Paul’s statement, “Professing to be wise, they became fools” (Rom. 1:22), for in Hegel’s system opposing propositions can both be true and must be synthesized into one new truth. This was his dialectical system. The result of Hegel’ s conclusions was a move further away from the traditional understanding that the propositional truth claims of Scripture were sufficient to answer all of life’s fundamental questions and guide mankind in every area of life, and a move further into the realm of mystical, even occult thought. For Hegel man was the consciousness of the universe, and all is ever evolving in this dialectical system.

Friedrich Schleiermacher (1768-1834). As previously mentioned, Schleiermacher is often seen as the father of liberalism. In Schleiermacher it seems that many of the elements of liberalism merge into one; German rationalism, higher criticism, enlightenment thought, etc., all merge at Schleiermacher. He rejected most of the orthodox Christian beliefs and did not trust any form of authority. Yet, he seemed to understand the damage that his beliefs would cause mankind, therefore, “he did not want to reject Christianity, recognizing that mankind needs religion.” To Schleiermacher, Christianity was a necessary evil. He rejected Scripture’s inspiration, therefore also rejecting its inerrancy and authority, which necessarily meant that Scripture is not sufficient to answer life’s question. Yet, he somehow believed that keeping the shell of Christianity in public life would be necessary – this is nonsense since the very root of Christian life resides in the sufficient, authoritative pages of Scripture.

Soren Kierkegaard (1813-1855). In this author’s estimation, Kierkegaard was the bridge between the damaging shift in philosophical thought and 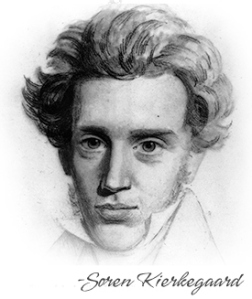 the shift away from the sufficiency of Scripture in the realm of theology. Kierkegaard was both a philosopher and theologian. Kierkegaard’s view of the two stories of reality can be seen in the following:

Thus in Kierkegaard’s system the Bible is not only insufficient in governing faith and life because it is not trustworthy.  Human reason must be relied upon to answer all questions in the realm of everyday life, and spirituality is brought to the point of a mere leap of faith into something that can never be known.

Around the same time that Kierkegaard was building a bridge between the fields of pessimistic philosophy and theology, Julius Wellhausen (1844-1918) began the direct assault on Scripture. Wellhausen rejected the inspiration of Scripture – in itself a repudiation of the sufficiency of Scripture – and began the application of the Hegelian dialectical principles to the study of the Bible. This led to the damaging practice of Biblical “higher criticism”.

The destruction brought by the higher critics resulted in an equally damaging response by those who are now labeled as Neo-Orthodox. The first influential theologian of this school of thought was Karl Barth (1886-1968). This movement is also known as “crisis theology” (due to its focus on God’s judgment), or “Barthianism” (after Barth himself). Barth sought to rescue the Bible from the liberal theologians, yet Kierkegaard’s influence can be seen in Barth’s theological product. Enns explains: “Karl Barth followed Kierkegaard in acknowledging a transcendent God and emphasizing a religion of experience. Barth taught that God could not be known objectively because He is transcendent; He must be known subjectively through experience.” In Barth’s conclusion we once again see the effects of Hegel’s dialectical system, in that Barth “denied the possibility of stating propositional truths.” Since God could not be known objectively through the propositional truth claims of the Bible then the words of Scripture must become the word of God in some subjective way. Once again, the sufficiency of Scripture was rejected and replaced by personal experiences throwing wide open the door to the mystical, occult experiences that have entered the Church today.

Whether meant as attacks or sincere attempts at interpreting and teaching Scripture, the cumulative effect of all of these movements can be seen in the resulting destruction of the view that Scripture alone is sufficient for every aspect of faith and conduct. On one side stands dinosaur-like view of the humanist that man’s reason is all that there ever was, is now, or ever will be needed to answer all of life’s questions and guide man through life, yet ultimately leads to despair. On the other side stands the new kid on the block; those who hold that reason must be set aside and the mystical subjective experience must be embraced, this view also leading to despair.

2 thoughts on “The Sufficiency of Scripture: Is God’s Word Enough, Part 4”