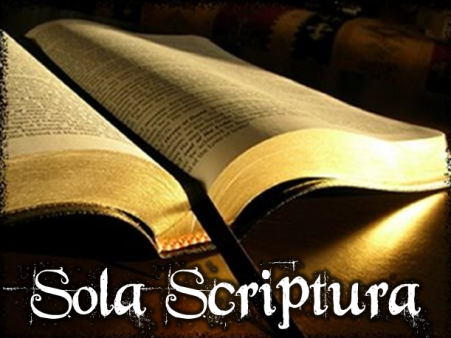 What follows is a portion of a presentation that I made several years ago.  The topic is a “life and death” issue, figuratively speaking, for the Church today.  Unfortunately, some of my documentation has been lost and some quotes are not attributed to the original authors.  Some may criticize for moving forward with publishing it for that reason, but I believe that what I wrote years ago is still fresh for today and needs to be reviewed by others.  For those whom I quote and have lost the proper notations, please forgive me.

I have played the great game of basketball from the time I was in the fifth grade all the way through my college years. One thing that all teams, leagues, conferences and divisions had in common was a single book; the official rulebook of basketball. During any game the rules written in that book governed the competition and were binding for everyone involved whether it is the coaches, players, scorekeepers, or referees. No one involved would dare question that book for it is the final authority for all things basketball. It is also sufficient to answer any question, settle any dispute, and completely govern the game.

In each game there were at least two men, sometimes three, who were to oversee each contest to make sure the rules of the rulebook, were understood and obeyed. These were the referees. Anytime there was any question concerning error or infraction concerning the rulebook these men would have the final say in deciding the answer, because these men had the rulebook memorized (theoretically and ideally). In my recollection of the years I spent playing basketball there is not one time that I can point to when my opinion was allowed to make the final decision when there was a violation of the rulebook. That is because the rulebook had already decided the outcome, and the referees would simple make a declaration of the rules already established. Even some 20 years after I played my last college game it is still that rulebook that governs the game of basketball. Not much has changed.

For thousands of years there has been one thing that was the final authority on all things, period; “Then God said…” (Gen. 1:3). Yet, seemingly no sooner had those words been uttered that another voice was heard casting doubt on the authority of the word of God; “Indeed, has God said?”(Gen. 3:1) Or in other words, “Is what He said really accurate?” And so the battle over the authority of God’s word began.

Such a battle has raged since that first question in the Garden with various waves of victory and loss of ground for those who would hold to the authority of Scripture. Along with that battle over authority must necessarily be included the question of sufficiency, for sufficiency is inextricably linked to authority. If the word of God is THE authority, then it must also be sufficient. This has been the orthodox understanding of Scripture in both the Old and New Testaments as well as in both the religion of the Jews and of the Christian Church. It is the purpose of this paper to discuss various aspects of the sufficiency of Scripture, and will do so with the presupposition that Scripture is the inspired, infallible, authoritative word spoken by God to man.

I will attempt to offer a simple definition of sufficiency, a brief description of the millennia long battle over the authority and sufficiency of the word of God, the recent developments in the battle and its effects upon the Church, and will close with an overview of what Scripture has to say concerning its status as sufficient providing the answer to the question; “Is God’s Word enough?” It is not within the scope of this article to delve into every deep crevasse that such a battle creates. However, it is my desire to discuss the issue as thoroughly as time and space allow.

Definition and Description of Sufficiency

Merriam-Webster’s Collegiate Dictionary (Eleventh Edition) defines the word “sufficient” by the following: “1.a: enough to meet the needs of a situation or a proposed end…b: being a sufficient condition.  2….being what is necessary or desirable.”  Thus, we may picture the word “sufficient” with the following simple illustration: the two-inch round peg is sufficient to fill the two-inch round hole.  To use another phrase, the round peg is just what the doctor ordered; it is exactly what is needed to meet the need at hand.  Some synonyms given are, “enough, adequate, competent.”

Dr. James T. Draper has offered a simple, yet adequate definition and description of the sufficiency as it relates to Scripture. He states:

“The ability of the Word of God to address every area of human existence is called the sufficiency of the Scriptures…An inerrant Bible is an authoritative Bible. Just as the doctrine of the inerrancy of Scripture logically leads to belief in its authority, even so the doctrine of the authority of the Bible necessitates the confidence that the Scriptures are sufficient. Christians did not arrive at the doctrine of the sufficiency of the Bible simply by way of logical reasoning; we believe that the Bible is the road map for living because it is what the Bible claims about itself.”  Added to this, another definition offered by John MacArthur; “the Bible is an adequate guide for all matters of faith and conduct. Scripture gives us every truth we need for life and godliness.”

Based on the preceding discussion I will begin this study by stating that it is my belief, as well as that of orthodox Christianity at least since the Reformation, that Scripture is sufficient, totally adequate, and competent to meet the needs of every individual Christian in every circumstance of life (see 2 Peter 1:2-3).  Nothing else is needed to guide us in our everyday living.  These definitions along with their corresponding descriptions will serve as our standard for the understanding and study of this most important subject.