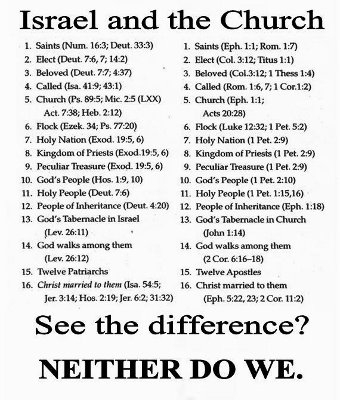 In a previous post (June 25, 2012) I began sharing many of the distinctions between Israel and the Church.  In particular, I simply shared twelve of the twenty-four contrasts that were identified by Dr. Lewis Sperry Chafer in the fourth volume of his Systematic Theology, and, in some cases, clarified or refined by Dr. Arnold Fruchtenbaum in his book Israelolgy: The Missing Link in Systematic Theology.  In this post I would like to continue what I began.

13.) “To Israel, Christ is Messiah, Immanuel, and King with all that those appellations imply.  To the Church, Christ is Savior, Lord, Bridegroom, and Head” (Chafer, IV:50)

14.) This contrast involves God the Holy Spirit and is the greatest of contrasts between Israel and the Church.  Under the Old Covenant in the Old Testament the Spirit did not indwell each individual saint.  As Chafer states, “Only in exceptional instances and for unusual service did the Holy Spirit come upon an Israelite, and the Spirit withdrew as freely as He came, when the purpose was accomplished” (Ibid.).  However, the New Testament saint is so because of or as a product of the Spirit’s indwelling – Romans 8:9b, “But if anyone does not have the Spirit of Christ, he does not belong to Him.”

17.) Contrasts between farewell discourses of our Lord.  The Olivet Discourse was delivered prior to Christ’s crucifixion detailing Israel’s failure and future “and that in its relation to His return (Matt. 23:37-25:46).”  The Upper Room discourse belongs to the Church and lays out “the seeds of later Church doctrine” (Fruchtenbaum, 427).

19.) Position.  Israel is described as a servant (Isa. 41:8) whereas the Church is “forever in Christ and are members in the family and household of God” (Chafer, 52).  “Not all Dispensationalists would agree with this contrast, though all would agree that there is some truth in it” (Fruchtenbaum, 428).

21.) Priesthood.  “The nation Israel had a priesthood.  The Church is a priesthood” (Ibid.).  As Fruchtenbaum points out, “While this contrast does have some validity, it need not be taken as absolute, for in Exodus 19:6, the nation as a whole was called to be a kingdom of priests” (Fruchtenbaum, Ibid).

24.) Position in eternity.  “The contrast here is not one of actual position but title, for both Israel and the Church will live eternally in the New Jerusalem.  Old Testament Israel is listed as ‘the spirit of just men made perfect,’ and these are distinct from the ‘church of the firstborn.’  Such an ‘enumeration’ clearly shows a distinction” (Fruchtenbaum, 429).

Hopefully by this time most of us can see that there are a number of contrasts between Israel and the Church. We can also see that there are many similarities also.  Yet similarity does not mean equality.  I grew up with some friends who are twins (Hey, Pickens!  How ya’ll doin’?).  They were identical to each other, at least they were “identical twins.”  Yet, if you were to know them you would begin to identify the distinctions between them.  They are very similar, but they are not the same person.  They are distinct.  So are Israel and the Church.  To confuse the two or conflate does great damage to Scripture and causes a great deal of confusion.

God bless.  I pray this helps.

2 thoughts on “Israel and the Church: Does One Equal the Other, Part 2”