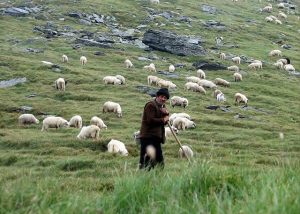 “Therefore, I exhort the elders among you,…shepherd the flock of God among you, exercising oversight not under compulsion, but voluntarily, according to the will of God; and not for sordid gain, but with eagerness; nor yet as lording it over those allotted to your charge…” – 1 Peter 5:1-3

I am a pastor.  I have been a “senior” or “teaching” pastor for 5-6 years now.  I have been in the ministry in other capacities for about 25 years plus some.  As you read this post keep these things in mind.

For many years I have had a love/hate relationship with pastors.  It goes back to my college days at a Baptist College in Arkansas in the 80’s and 90’s.  Many of the gentlemen that I attended college with were ministry majors and planning on going into the pastorate.  Some of them were good, God-loving, Bible-believing men who desired to serve the Lord and His Church.  However, many of them, well, to put it kindly, I wouldn’t want to send anyone to a church where one of them was the pastor.  It was obvious, or at least it seemed very clear to me, that some of them desired the position out of less than pure motivations.  Some of them were downright lazy.  Many of them have failed badly in their ministries and are no longer in the pastoring, no longer married, etc., etc., etc.

To make matters worse, with the advent of the pastor-as-ceo model of pastoral leadership, my troubled relationship with pastors has not gotten any better.  Neither has the way that many pastors deal with the flock over which they have been placed.  Case-in-point: I have a close friend who has been in the ministry several years longer than I.  He is not a teaching pastor.  I will leave the identification at that.  He has faithfully served in many churches and is one of those men who could get along with anyone and strives to do so.  In the last couple of years he has been forced to leave two different Baptist churches.  In both instances, it has been due to the pastor, or should I say, the CEO of the church in which he served.  In both cases, the pastor has had the habit of “running” the church like a business, and he, as the Chief Operating Officer, treated people like nothing more than “human resources” (a demeaning, dehumanizing term).  The prevailing sense was one of, “if you’re not producing like I think you should, then you’re out of here.”  My friend has been wounded at least twice in this fashion.  It makes me very angry!  It damages the entire local body in which these pastors serve.  It is toxic.  It is not pleasing to God, nor does it measure up to what the shepherd is supposed to be.

Unfortunately, the ladder-climbing CEO pastor seems to have become the norm, at least in the Southern Baptist realm (I pick on the Southern Baptist because that is where my roots lie).  I could point fingers at where I believe this philosophy of ministry began, or who was the one that brought it to the fore, but that is not the purpose for this post.  This post is a warning to pastors who will read it.

Paul revealed the character of the elder/pastor in the pastoral epistles of 1 Timothy and Titus.  However, I appreciate very well how Peter described the duty of the pastor/shepherd.  “Shepherd the flock.”  What a picture of the pastor/teacher/elder/bishop (I really like these forward slashes!).  Let’s consider the shepherd.

Before we look specifically at what Peter teaches, look at how Easton’s Bible Dictionary describes the task of a shepherd:

The duties of a shepherd in an unenclosed country like Palestine were very onerous. “In early morning he led forth the flock from the fold, marching at its head to the spot where they were to be pastured. Here he watched them all day, taking care that none of the sheep strayed, and if any for a time eluded his watch and wandered away from the rest, seeking diligently till he found and brought it back. In those lands sheep require to be supplied regularly with water, and the shepherd for this purpose has to guide them either to some running stream or to wells dug in the wilderness and furnished with troughs. At night he brought the flock home to the fold, counting them as they passed under the rod at the door to assure himself that none were missing. Nor did his labours always end with sunset. Often he had to guard the fold through the dark hours from the attack of wild beasts, or the wily attempts of the prowling thief (see 1 Sam. 17:34).”, Deane’s David.(1)

The shepherd exercised great care and concern for the sheep of his flock.  The shepherd of a local church must, or is supposed to do the same.

What does Peter say?  First, the shepherd is to exercise the same oversight as a literal shepherd as is seen by the word poimano (shepherd), as well as the word that follows, episkopeo, “exercising oversight, care, to minister.”  Secondly, the shepherd is to do so voluntarily, of one’s own free will.  A word for you pastors; no one is forcing you to do this.  You do it of your own free will.  The third point that Peter makes is that the pastor is to complete his duties not as a result of a desire for “sordid gain.”  He is speaking of those who serve, or seek to be served by, the church out of a greedy desire for financial gain.  Can anyone say TV preacher?  Finally, at least in verse two, Peter states that the pastor/shepherd is to minister to his assigned flock, “eagerly.”  This is an attitude that is often missing among pastors.  Sometimes understandably.

The next portion of Peter’s imperative to pastor/shepherds is where I want to focus the remainder of our time together.  Peter says, “nor yet as lording it over those allotted to your charge, but proving to be examples to the flock,” (v.3).  Focus on one section: “nor yet as lording it over those allotted to your charge.”  The word is katakurieo, which in its positive meaning simply refers to ruling over someone.  However, it can also have a negative connotation of one who, as the NASB states, lords over those in his charge.  This is how many pastors “rule” the church in which they serve.  It doesn’t always show itself to the broader body of the church, but is often seen in the lead, or senior pastor’s relationship with his subordinates on staff.  It seems like they don’t view their underlings as fellow-servants or even part of the flock.  They are just hired hands (an attitude some churches have concerning the senior pastor, but that is for another time).  And if they don’t produce the way the pastor desires then it’s “hit the bricks, buddy.”

However, this attitude also can be seen in such a pastor’s handling of the sheep.  When a member dares to hold a view contrary to the pastor, that person is dismissed as not “having the proper DNA” for that specific church.  If a member dares to question the pastor concerning a doctrinal or philosophical difference they have, they are vilified and sometimes asked to leave.  Stories that match these descriptions are too numerous to list.  But it has become all to common.

Wake up pastor!  Warning!  Warning!  Warning, Will Robinson!  Danger!  Danger!  Verse four of this passage goes on to identify the reward for the faithful pastor; “And when the Chief Shepherd appears, you will receive the unfading crown of glory.”  The message is clear, but the implication is also important and it is that you, pastor, will not receive such a crown if you do not obey Peter’s command and carry out your duties accordingly.  Paul’s words can be added to this warning.  “Now if any man builds on the foundation with gold, silver, precious stones, wood, hay, straw, each man’s work will become evident; for the day will show it because it is to be revealed with fire, and the fire will test the quality of each man’s work.  If any man’s work which he has built on it remains, he will receive a reward.  If any man’s work is burned up, he will suffer loss; but he himself will be saved, yet so as through fire” (1 Cor. 3:12-15).

Please listen to a fellow pastor.  If you don’t like people, in particular the people that you are to shepherd, you need to consider a change of careers.  If you are burned out, get some help.  Southern Baptist pastors have a safety net of sorts, at least in the Arkansas Baptist State convention.  Even if you don’t, there are people who would be willing to help you in your time of trouble.  Remember, also, that the Church is viewed by Christ as His bride.  I would never allow anyone to abuse my beautiful wife.  I don’t believe that Christ is pleased when the one who is supposed to showing loving care for His bride is the one who is abusing her instead.  I don’t believe that will go undisciplined.

I pray this helps.

3 thoughts on “Shepherd, Not CEO!”