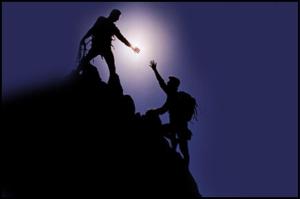 I’ve been thinking about the responsibility that the body of Christ has to reproduce and make more disciples. Since I will be teaching on this subject in the near future I thought that I would share some observations with you.

Of course the passage that most directly addresses this is Matthew 28:18-20.  In these verses Jesus gives an imperative, a command that His disciples “make disciples of all the nations.”  Of the abundance of information found in these verses, I wish to focus on what a disciple is.

The Greek word translated as disciple can be defined as a learner, apprentice, adherent.  Therefore, a disciple is one who is a learner, or the word that seems most appropriate is apprentice.  An apprentice is bound to a master craftsman in order to learn his trade.  In other words, one who is trying to learn to be like the master craftsman.  Interesting isn’t it.  That is exactly what a disciple is; it is one who wants to be like his master.

That leads to another passage that will explain all of this.  In John 13:15-16 Jesus said, “For I gave you an example that you should also should do as I did to you.  Truly, truly, I say to you, a slave is not greater than his master, nor is one who is sent greater than the one who sent him.”  Jesus presents the very essence of what being a disciple is.  He has left an example that we should follow and those who are His disciples follow His example.  As He said in Matthew 28:20, the disciple is to be taught to “observe all” that He has commanded.  To observe is to “keep, fulfill, pay attention to” all that Jesus has taught, which in turn will produce a certain lifestyle, i.e. a disciple.  What He has commanded includes all that the Apostles had revealed to them through the Holy Spirit as seen by what He said in John 16:12-13.  And if we love Him we will keep His commandments (John 14:15).

That is what a disciple does.  He follows in the footsteps of His master following His commandments because the disciple loves the Master.

I pray this helps.

2 thoughts on “Thinking About Discipleship”